Aeration tank at a paper mill 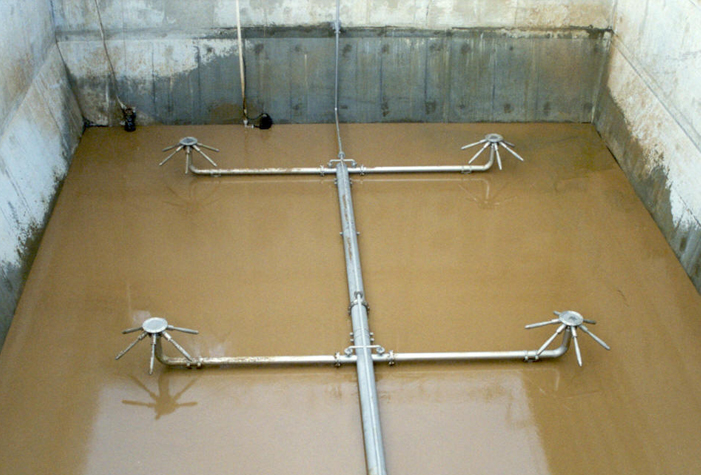 Oxygen transfer system in one of the two 3400 m³ sized aeration tanks belonging to the Lang paper mill in Ettringen. Eight six-path ejectors each are supplied with oxygen generated as off-gas in a downstream ozone plant.

Towards the end of 2009 Körting Hannover AG received an order from the Westfalen AG covering the supply of an oxygen introduction system for application in the waste water treatment plant of a German food maker. As the system had to be installed during active plant operation, a so-called "skid-mounted unit" was chosen which consisted of two single-path ejectors and a submersible motor-driven pump mounted on a common base frame. The 22 kW unit delivers an hourly amount of 400 m3 waste water into which 80 kg of gaseous oxygen is introduced. With this, the microorganisms in the 2600 m3 large activation tank are kept alive and moving.

Apart from the oxygen introduction system, a square section with lifting eyes for lowering the completely assembled unit made up of ejectors and submersible motor-driven pump as well as a small switchboard cabinet belonged to our scope of supply. The system was installed and put into operation without any problems occurring.

At the same location the final customer also operated a further identically constructed aeration tank which, one year later, we were able to equip with an identical oxygen introduction system. Here too, our customer was the Westfalen AG.

With this project, the Westfalen AG, as a national and international supplier of technical gases, and Körting Hannover AG, as an independent manufacturer for oxygen introduction technology, have laid the foundation stone for a successful collaboration.